Our family recently spend five wonderful days in Boston, MA. We had a great time in this walkable city seeing the sights, and visiting museums. Boston offers so many things to do and see, and we quickly realized that a 5-day-trip was not nearly enough time to even cross of half of the things we...

Our family recently spend five wonderful days in Boston, MA. We had a great time in this walkable city seeing the sights, and visiting museums. Boston offers so many things to do and see, and we quickly realized that a 5-day-trip was not nearly enough time to even cross of half of the things we wanted to do and see. Oh, well. I guess we will just have to return time and again.

So what did we do in Boston for 5 days? Follow along to find out.

Day One: Wrestling the Tribe into the van…

Traveling with a family of seven is—well—interesting. Never a dull moment. Day one of our Boston adventure started early in the morning: loading the van, wrestling kids out of bed, getting them into the van—and then the drive to our destination. Boston is about a 5.5-hour drive from our home in the Adirondacks. Kids in the van: check. So far so good.

Front his pictures it looks like there are only six of us here…where’s Matt? Under a blanket back there somewhere zonked out.

We had trouble finding an Airbnb available for the whole stay so decided to stay at a hotel the first-night use outside Boston close to the mall. The big guys spend their evening out together having dinner and the night at Barnes and while Hubby and I took the little ones down to the pool. When in doubt of what can keep the little ones busy we always try to fit in a stay with a pool.

It was a nice destination stop and the boys good time splashing . We had a great nights sleep but by morning we’re ready to get into Boston.

Day Two: Airbnb in the North End , Lunch at Quincey Market, and the Ghost Tour!

We stayed in a wonderful Airbnb, 3 bedrooms, and 2 baths, in the North End on Scheaf Street, which was a perfect location for walking everywhere we wanted to go—and was around the corner from Copp’s Burying Ground. For those who do not know, I write middle-grade monster novels and Copp’s is a location set in the story where ghouls escape.

Street parking in the North End of Boston is non-existent and the narrow streets didn’t allow for pulling over to unload a crap ton of kids and luggage. Luckily, there was a parking garage less than a block from the apartment.

We dropped our luggage and headed on foot to Quincy Market.

The boys loved running around the square and watching the street performers. Quincey Market, filled with booths of food and treats was a hit. Everyone was able to eat what they wanted —no one ever agrees on what to have for meals so everyone being able to eat somewhere different is a huge bonus for us!

Posing with statues around Quincy Market. The boys [including Hubby, or mostly Hubby] spent hours in Newberry Comics while the little ones chased birds and each other outside.

I love ghost tours and this one included two famous graveyards in Boston, one of which I’d already mentioned I needed to go see—Copp’s Burying Ground. Matthew, Thomas, Jay, and I took the Ghost tour. The tour has a minimum age of 6 years old because the website said it was unsuitable for younger children. Hubby’s stayed home with Jason and Adam—being Adam—did as well. Honestly, I think my five-year-old would have been fine on the tour. It was not too scary, but perhaps he would have been bored and restless. We were not. The tour was awesome. Thomas especially had a great time when he was given the task of holding the lantern at our first stop and leading the group into the creepy graveyard at night.

The tour was also the beginning of Thomas’ Paul Revere study. We asked the freedom trail, visited the Tea Party Museum, North Church including the tour of the bell tower, which Tom insisted upon, and Paul Revere’s house. The eight-year-old was on a mission. But, it all started here with Paul Revere’s grave.

It was a great night!

The day began with a Hop-on, Hop-off bus tour that took us to our target destination: the Boston Tea Museum. First a few things about the bus tour. The Hop-on/Hop-off bus takes you around Boston while the drive provides commentary and history of the different neighborhoods. The portion of the loop we took lasted about an hour. We “hopped-on” a block from our Airbnb and “hopped-off” across the street from the Boston’s Children’s Museum, which was a half block (if that much) from the Tea Museum. I purchased the tour online and admit it was pricey for a family our our size.

I likely wouldn’t do the hop-on/off tour again if had to do it over because Boston is so walkable that even with the small boys in tow walking was faster. Although, there are a few things that made this purchase worth it. We went in November and the weather was chilly, my 5-year-old sleepy, and the tour came with free adminssion to the Wax Museum, which we would have never visited had it not been free. I had to get my monies worth! And afterwards—the boys said they really liked the bus. I thought they were bored—what does Mom know!

Boston Tea Museum offers an interactive experience of the events leading up to the famous event in American history. Of course, the best part for the boys was reenacting the tea tossing. What can be more fun than throwing tea into Boston harbor?

After the Tea museum, the boys enjoyed the rest of the day as we roamed around Boston and they ran off some energy at Boston Commons.

The big guys spend the day roaming on their own. Adam found a few Barnes and Nobles to explore while Matt and Jay headed over to Chinatown to find a Ramen lunch. Hubby and I, we had a great time with the little boys at the New England Aquarium!

Both Thomas and Jason had a blast, but Jason in particular LOVED the aquarium. He insisted on touching the stingrays and soaked his hair because he nearly had his face in the tank. Then he hugged and played with every one of the stuffed animals in the gift store—seriously, we spend nearly two hours there—in the gift shop. Both boys loved the penguins.

But , what really made this part of the trip for us happened the next morning. We told Jason we were going out (heading to Children’s Museum) and he got so excited and used his sign for “fish” because he thought we were going back to the aquarium. It was sad, but awesome too!

[For those of you who do not know, my five-year old is non-verbal and communicates with sign language, so his first use of “fish” was very exciting.]

This is not an activity that was even on my radar for our family trips. Remember what I said about not thinking the Hop-on Hop-off tour was worth the price? These are the things I need to remember every time I think that! We would not have gone to the Wax Museum. Not with a family of this size and entrance of $25 each. With the small boys, the thought of paying a $150 to walk into a museum that they may hate and cause us to leave in under a half an hour, makes me cringe.

But—they loved it. [No, I still wouldn’t pay that amount of money to walk through for the hour with this tribe and take pictures with wax models, but I am glad it was included as a free bonus and we did it.] Now, Hubby wants to see the big one in London! So when we visit London this spring, I will be buying the London pass which includes the wax museum [35 pounds each entry] for free. No, I still can’t pay that kind of money for an hour in a museum—not with two small autistic boys. Sorry.

Anyway, we did enjoy the wax museum way more than we expected.

A few more stops: Boston Children’s Museum; The Old North Church; Paul Revere’s House; and of course the concert the guys went to on their last night!

The Boston Children’s Museum was a hit!

I toured The Old North Church with Thomas and Matthew while Hubby readied the little one to head out for the day… Thomas had the most fun of the trip {according to him} taking the tours. We missed the tour of the bell room on the first day we visited, and my seven-year-old made me schedule the tour for the following day. He wanted to see where the lanterns were hung before The Midnight Ride–and where Paul Revere rang the bells as a young boy. It was awesome watching him ask the tour guide questions and have such an interest in history.

Did I mention we toured the crypt? And the gift shop, and the chocolate house in the back?

This adventure began because my oldest son wanted to go to Boston to see the Mike Shinoda concert at House of Blues! The boys had an awesome time.

Day six: On our way back…but not before another trip to Quincy Market, and the promised visit to Paul Revere’s House.

Have you been to Boston with your family? What were some of your favorite things to do? Leave suggestions in the comments! 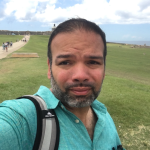 Husband to Jeannie, father of four ASD kids and a permament house guest also diagnosed with ASD. Comic book geek who loves most things superhero related. Likes to read, write, and sing. Loves movies, and thinks the inventor of Netflix should get a Nobel Peace Prize. Likes fashion and shopping (yes I said it).